Birds of a Feather

What Does Birds of a Feather Flock Together Mean?

(This information came from someplace on the internet.) 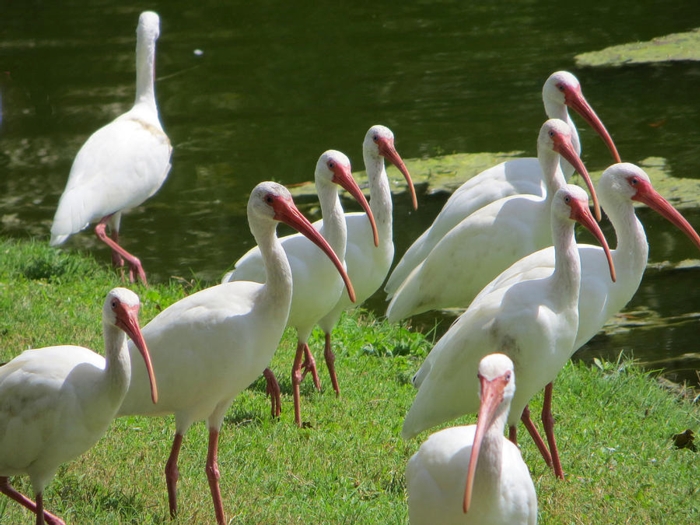 Birds of a Feather Flock Together

Definition: People will spend time with those most similar to themselves.

Origin of "Birds of a Feather Flock Together"

This idiom was inspired by nature, by the fact that birds of a feather, or birds of the same species, flock together, or group together in flocks to fly or roost. It is uncommon to find birds from two different species flying together without fighting.

Most sources point to a text by William Turner in the year 1545 titled The Rescuing of Romish Fox as the first written use of this expression,

“Byrdes of on kynde and color flok and flye allwayes together.” 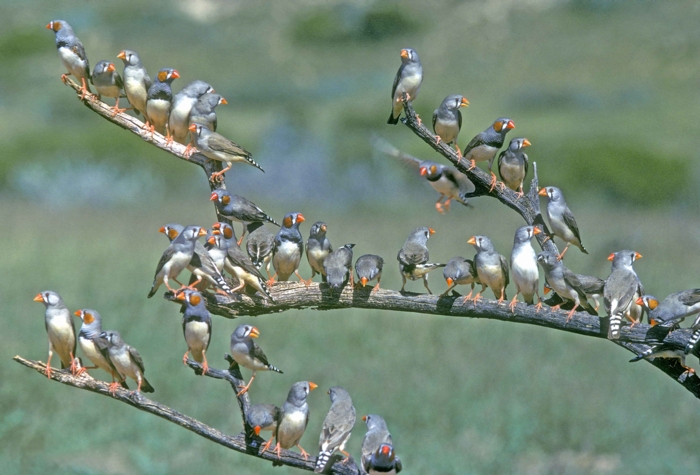 Examples of Birds of a Feather Flock Together

This example shows one woman using the expression to demonstrate to another woman why her daughter is not fitting in at school.

Bella: How are things going with your daughter at her new school?

Hannah: She’s still having a terrible time. None of the other girls will hang out with her.

Bella: It will happen eventually. She’s new there. She’s also so different from them.

Hannah: How? They’re all the same age.

Bella: I know. But the other girls probably view her as being an outsider because she’s from a big city, and they’re all from rural areas. You know how they always say birds of a feather flock together? Once they realize they have things in common, it will be much better. 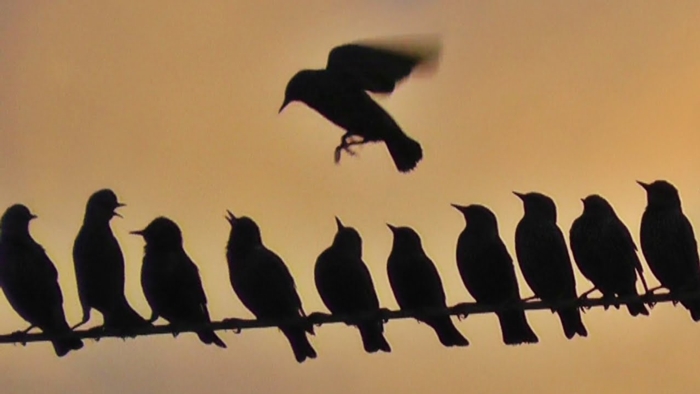 The following example shows how the idiom is used in a conversation about sororities.

Hanh: Don’t all of the women in that sorority look as if they are dressed in the same way?

Zhongyi: They do say that birds of a feather flock together.

Hanh: Actually, I think I remember hearing something about a dress code.

Zhongyi: Oh, that would make sense too. 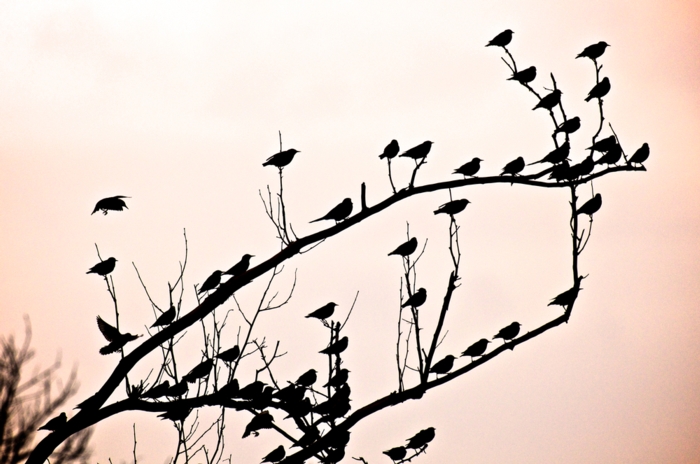 This example, in the opinion section of the newspaper, shows the idiom being used sarcastically to say that everyone named Mike should have the same opinion.

The second example uses the proverb to introduce a study that wants to test if this proverb is scientifically true when relating to humans.

Birds of a feather flock together is an English proverb that means people will sort themselves into communities of like-minded individuals.

On a personal note, we feed the birds out on our back deck, especially during winter. Some people like to shoot them, and that's ok.  But we prefer to feed them a little and let natural selection take care of the rest.  We only get four species of birds on a regular basis: Stellar's jays, little juncos (sparrow-like), dove, and -- wait for it -- wild turkeys!

The jays are very entertaining and acrobatic.  During the winter they are particularly aggressive towards one another, though no harm is ever done -- it is just a territorial show and a confirmation of the current pecking order.  The jays actually follow me around while I am in the house, flitting from tree to tree (outside) to catch my attention, squawking all the while.  The jays come in silently in pairs or noisily in larger groups.  The only other bird type that occasionally will share the space with the jays are the doves.  These birds have been coexisting in  the same areas for millions of years.  I guess they have learned to live together, mainly by ignoring each other.  If a flock of jays comes in the doves will leave and come back later after the hubbub has died down.

The juncos are much smaller birds and always come in a group of ten or more.  They don't hassle each other like the jays do.  If a jay shows up they simply leave, wait them out, and then return later.  They make little tweety sounds, which is a welcome call compared to the offensively abrasive squawks of the jays.  I'll put it this way: jays ain't no song birds.

Then there are the turkeys!  We were surprised this year when four hens decided to fly up onto the deck and start pecking at the bird seed.  Turkeys are fifty times bigger than the jays.  The Stellar's jays take off when the turkeys arrive.  Most people don't realize that wild turkeys can fly up to a hundred yards if they need to.  Plus, they need to fly up into the oak tree limbs to roost at night.

Here are a couple recent photos of the wild turkeys that have visited us lately. 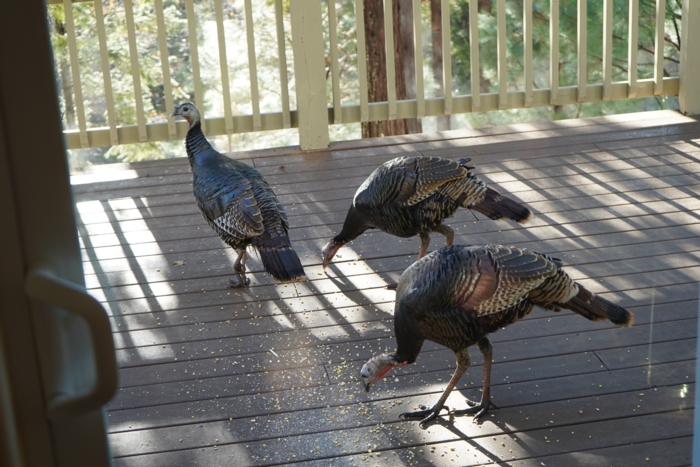 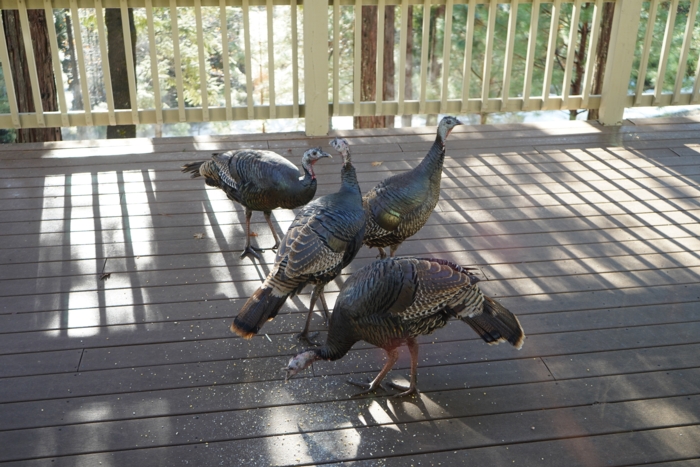 Here is another rare sighting of a wild turkey, courtesy of Vicki's late father, Glenn O May. 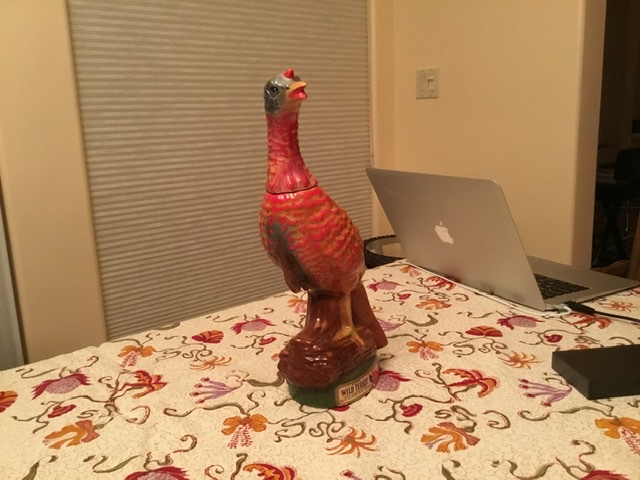 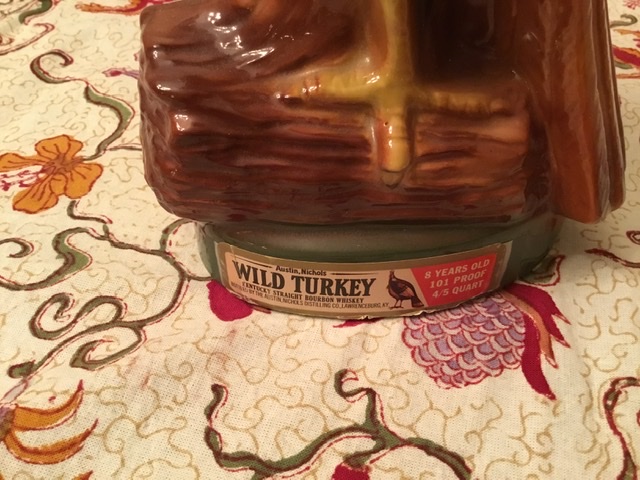