I was curious about the classmates who decided to participate in the 50th reunion activities.  What can we say about why a person would choose to show up or not?  Are there any clues from way back in high school that can enlighten us?

Being the analyst that I am, I started digging around in the past to see if a pattern emerges, or if it just "is what it is", with no particular reasoning or causation involved.

Let's start with one of my favorite 1968 Merrimac photos: the Industrial Arts Club. 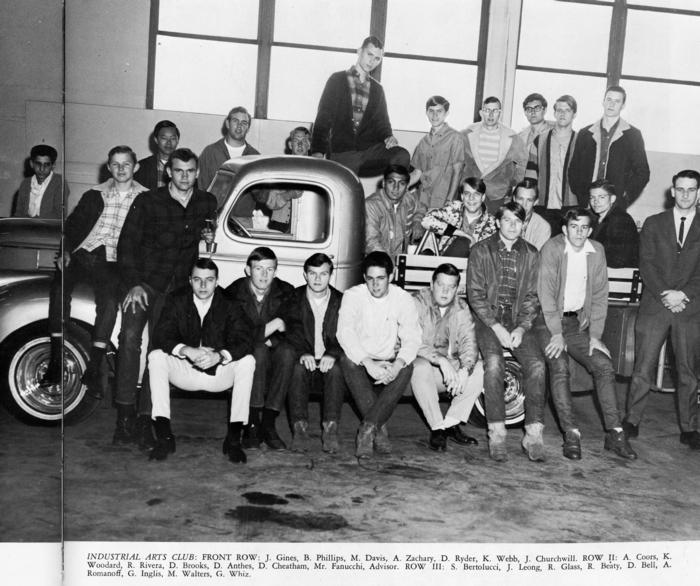 The question is, how many of the seniors in the photo above made it to the 50th Reunion?  I count 14 seniors in the picture.  Of those, 6 made it to the event: Jeff Goines, Barry Phillips, Ruben Rivera, Dick Anthes, Jeff Leong, and Dave Bell.  So, 6/14 = 43% -- not too bad. We realize that there are at least four senior guys in the photo who have passed away.  Also, Mike Davis signed up for the events but decided to go on a Harley ride across the US, instead (came up at the last moment). An odd thing about this shot is: Why is it so crooked?  The reason why it is not straight is that if you cropped and tilted it upright you would also lose the teacher, Mr Fanucchi, from the picture.  We can't have that -- so it is, and always will be, crooked.

Here's how it looks when straightened out.  Notice that there is no longer a Mr Fanucchi in the frame and part of Dave's head is also compromised.  But at least it is straight (the picture, that is). 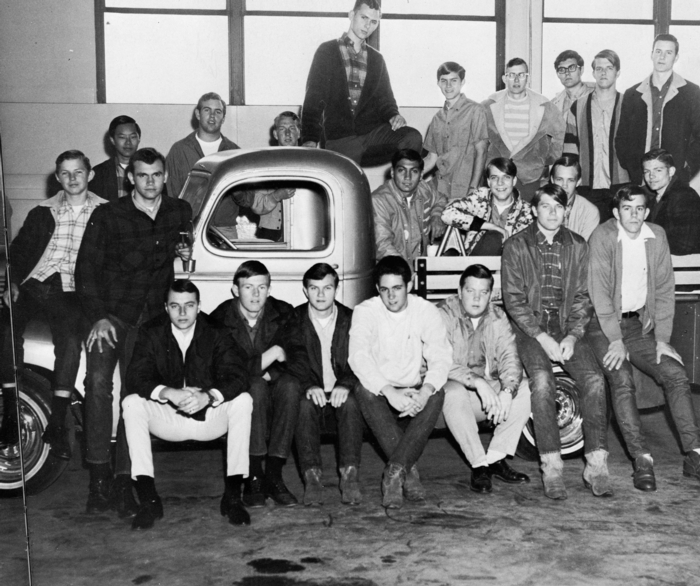 Let's consider the Merrimac staff next.  Here they are:

This looks like a fun class to be in. I count 11 seniors, but if you look in the insert (lower right) you will see one more - photographer Bobby Rader.  Of those 12, half are reunion bound.  Therefore, Merrimac gets 50%: Mike Martin, Sherrie, Rita, Roanne, Marta, and Bob Rader.  Ed Underwood signed up but had a last minute commitment.  We spoke to a couple others who wanted to show but could not make it happen.

Speaking of photography, let's see what the Photostats contributed to turnout. 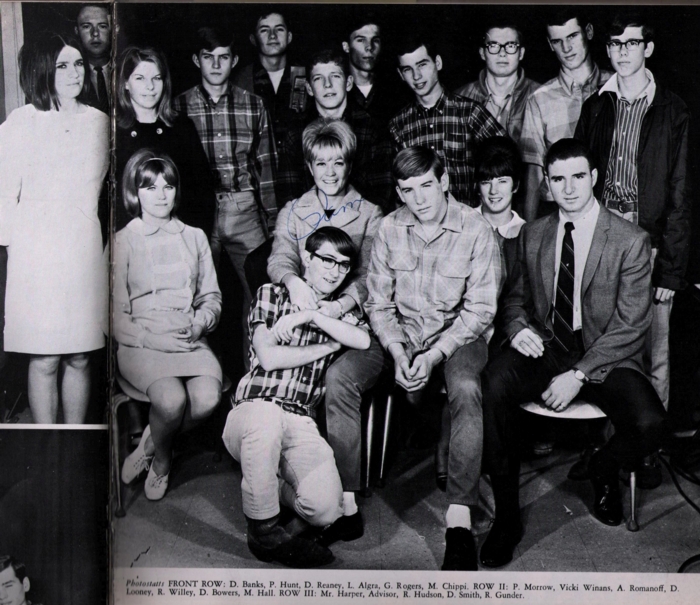 I only see 4 seniors, two of which showed up: Pam Hunt and Ron Hudson.  2/4 = 50% participation.  Allen Romanoff has been to other events in the past, but I don't know what happened this time. We know that Glenda had a conflict.

Ok, how about the track team?  What was their turnout like?

While we are talking about running, let's check out the Cross Country team.  Here they are: 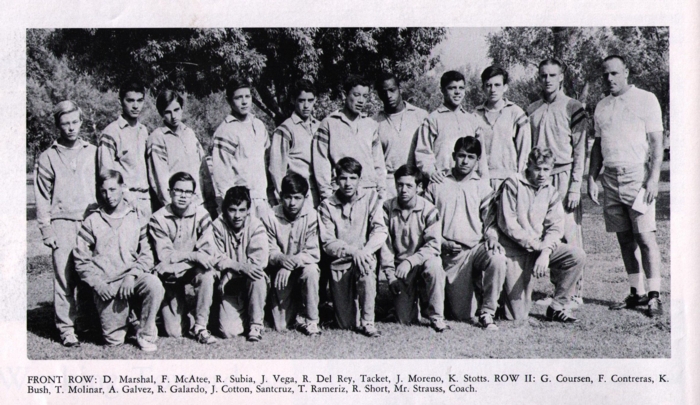 We see some of the same people here.  Seniors?  I count only 5.  Jack Courson and Rick Short were able to make it.  Therefore, 2/5 = 40% participation.

One person has opined that the Band had the highest participation rate.  Let's check that claim out for ourselves: 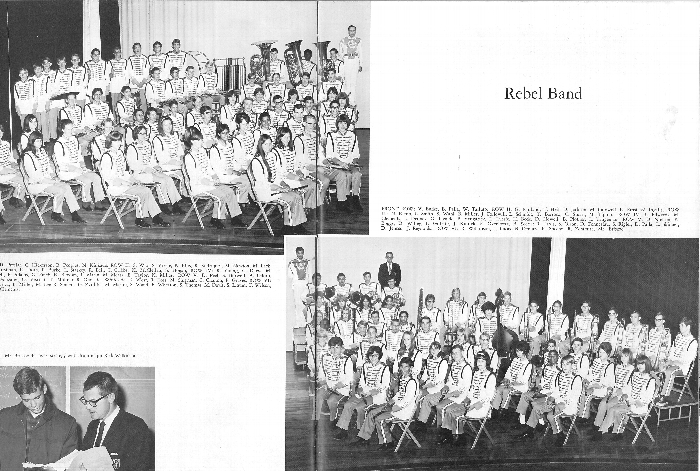 You don't have to take my word for it (count 'em up, if you choose), but I count 8/17 = 47%, which is not shabby but is simply not strong enough to go for the gold.  The Band was actually beaten out by the Photostats.  All senior trombone players were accounted for at the reunion, even the guy wearing black tennis shoes.

Let's check out the tennis team: 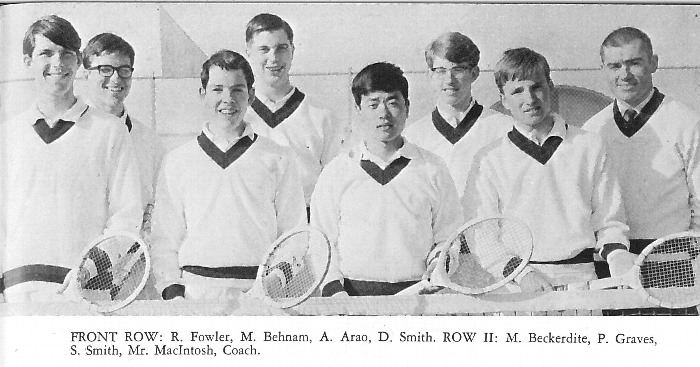 With a little work these guys could have been 100%,  but I couldn't find common-namer Steve Smith and Paul Graves couldn't quite make it here from Lompoq.  Mike B and Alan attended so they get 50%.  If I had it to do over again, I would have either played tennis or golf in the spring time.

I know that you are all wondering about the Political Action Club.  How many of them showed up 50 years later? 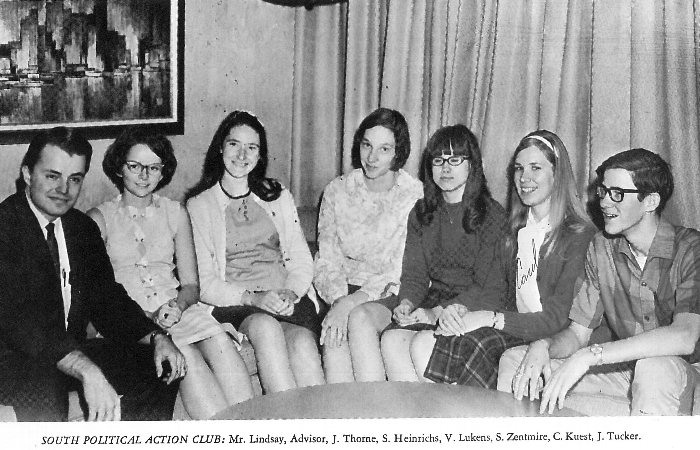 All six of them are seniors, but only one was able to make it to the 50th - Carol Kuest.  I never found JimTucker.  Have spoken with Vickie, Shirley and Susie.  1/6 = 17%.  As I've said before, if I had it to do again I would have been in this group.

Back to sports -- how about the wrestling team?  They won the SYL for the fourth time in a row,but would they show up for a 50th reunion? 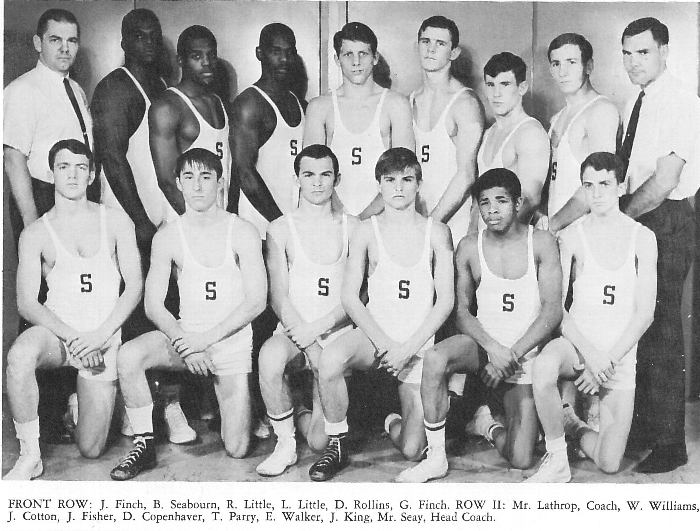 CSF (California Scholarship Federation) is a group that needed to maintain pretty high grades throughout high school.  Most of the people in this group went on to college, mainly out of town.  That in itself, with the auto-detachment from Bakersfield, would tend to provide less of a connection to our town and school as time goes by.  For myself, I can say that after I graduated from high school my connection with Bako was only through my family and Vicki's family.  I never really lived here after the age of 18, except briefly through the summer months of working for the Kern County Fire Department.  Therefore, it is reasonable to expect less of an urge to return for a 50th reunion from this group.  Besides, they tend to live all over the country by this time.  So distance is a factor. 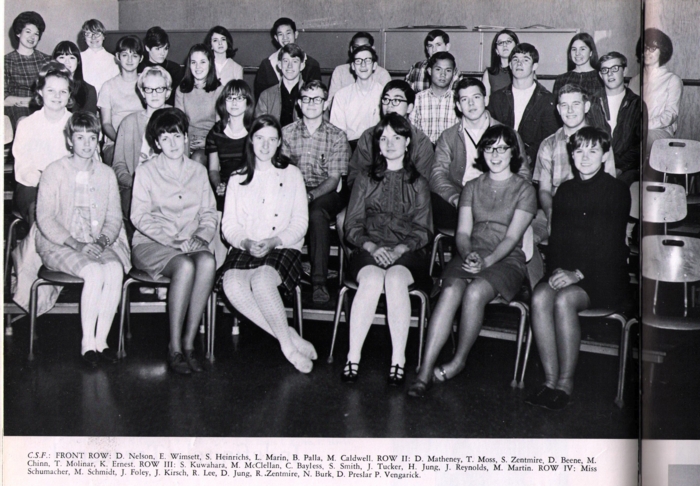 Well, CSF went 3/13 = 23%.  Just Mike Martin, Mike Chinn and myself.  We all had a great time.  However, true to the blueprint, not one of the seniors in this photo live in Kern County. People get out and see the world and sometimes (often) they don't come back.  That is not always the case, but it is a general tendency when you look at the span of our lives since high school. That's life.

Rebel Yell was a similar situation.  Many of the people in the photo below left town and did not return. 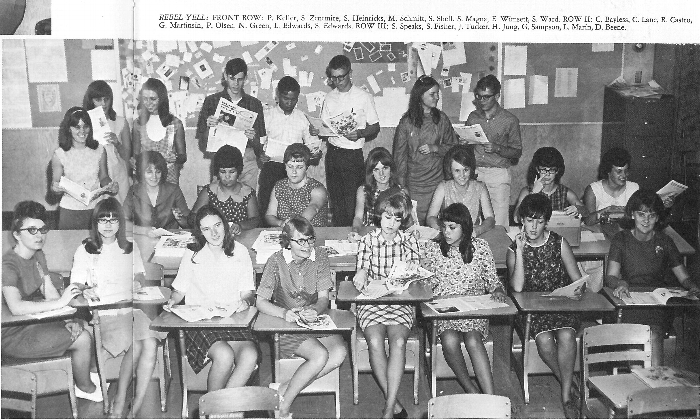 This looks like a great bunch of smart people.  My guess is that putting out a paper every couple weeks is more stressful than doing one yearbook at the end of the year -- but what do I know?  Anyway, the two that showed -- Patti Keller and Janet Ward, both live in Bakersfield.  So proximity has something to do with our numbers.  2/13 = 15% participation.

In our next installment we'll show you the groups, teams and organizations that really turned out bigtime for the 50th reunion.  I think that you will see some surprises.