For us, it all starts in April.  For most people March is the month of daffodils, but they show up a little later at 3500 feet up.

Here's the first ones that popped up by the front door.  As usual with daffs, they got bombarded with rain and wind right after they emerged onto the scene. 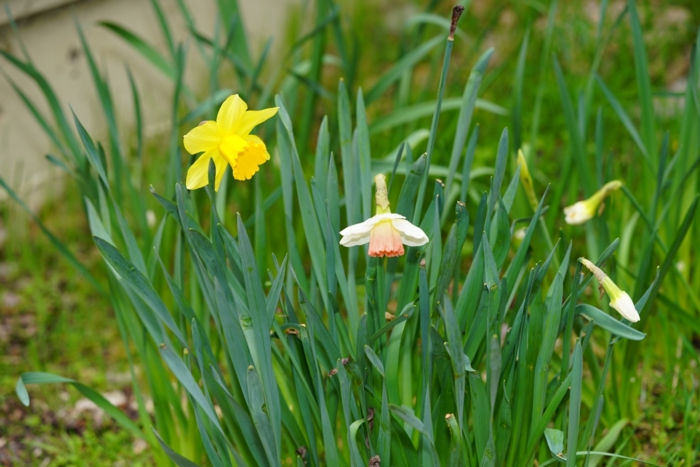 They come in many different shapes and colors. 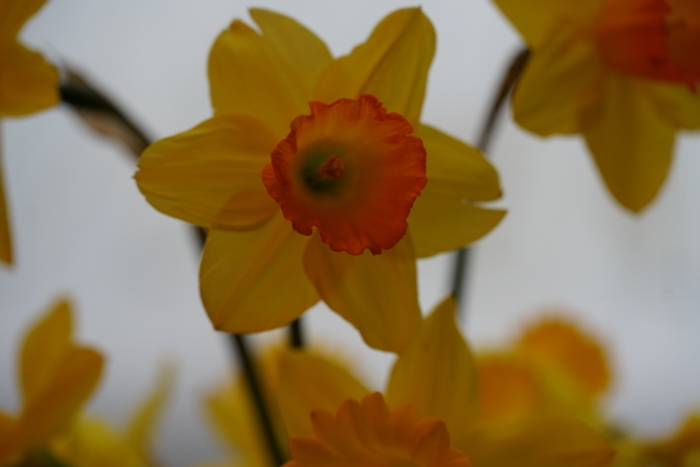 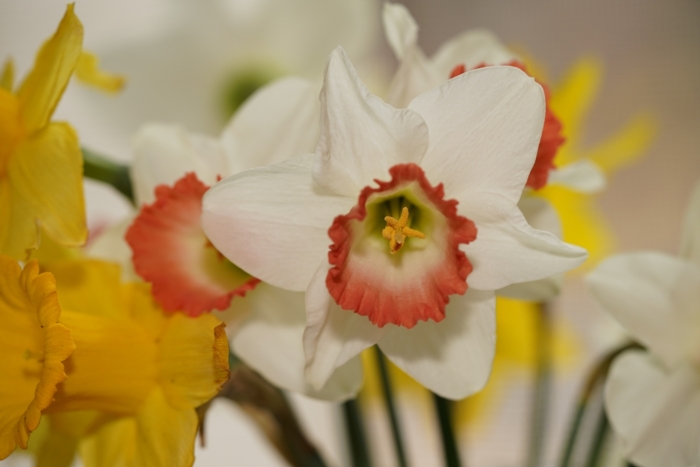 Vicki decided to plant a few down by the gate.  The front gate is off to the right and the house is up the road to the left, about 500 feet. We'll show you photos from our game camera that reveal much animal (and people!) activity around our front entrance. 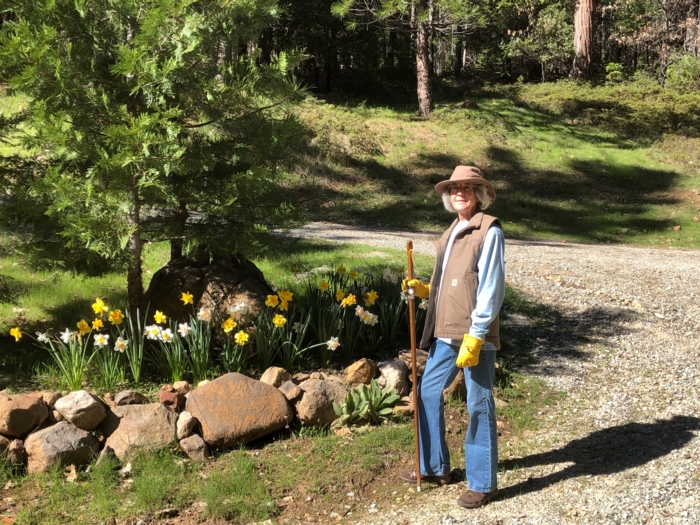 If you want to know where the sun is, just ask a daffodil.  They usually have a pretty good idea about that. 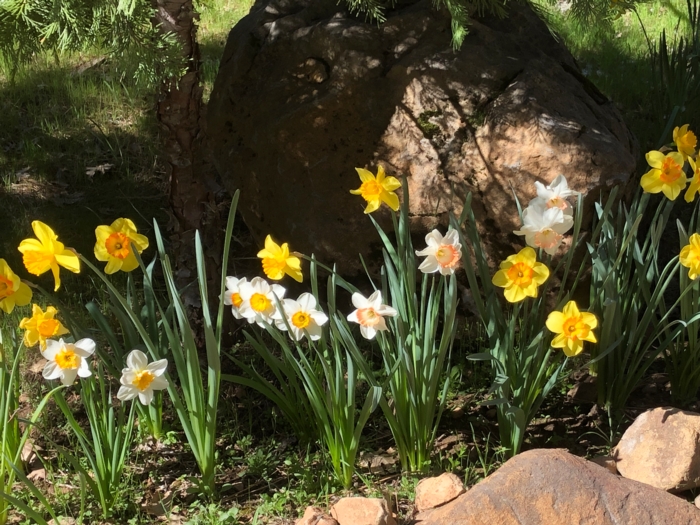 In early May we traveled to Bakersfield to get a house there ready to sell. Bako, as we know, is in one of the most fertile valleys in the world. Everything seems to grow there -- but it needs to be watered.  Out in front of the Stolle house you will see this rose bush, which we transplanted years ago from Vicki's parents' house, which was next door.  One of my cousins gave it to us to commemorate my mother's passing in 2003.  Her name was Rose.  You can still see the tag on it.  It was about 18 inches tall when we got it 16 years ago.  It has been transplanted 3-4 times so it must be resilient. 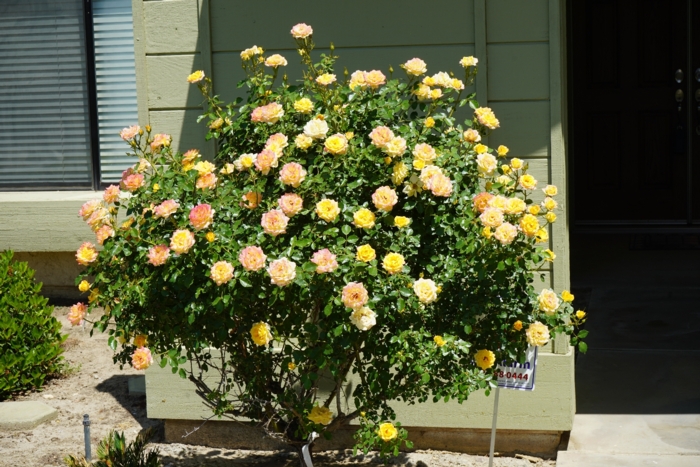 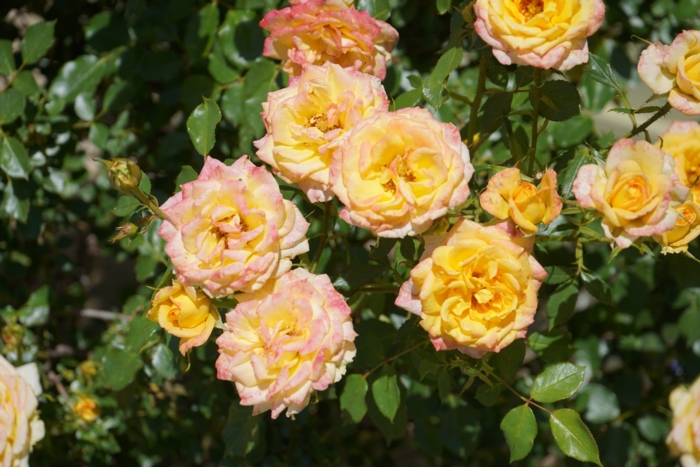 I think that the next one is an orchid that Vicki bought at the grocery store.  This photo illustrates why these closeup flower "grab shots" are not professionally done.  It all has to do with something called "depth of field" (DOF).  In  closeups you need to focus on something -- in this case it was possibly the middle back petal, or possibly the yellow/orange-dotted thing at the bottom of the flower.  This makes other parts of the flower out-of-focus.  Why?  Very limited DOF.  We need to close down the aperture to get more DOF.  The DOF appears to be less than an inch in this photo.  To get more of the flower in focus you need more light.  This could be done with a strobe, multiple flashes or possibly a reflector of the sun's light.  Or, you could put the camera on a tripod and try a slower shutter speed to get more light (but only if there is no wind).  I didn't bother doing any of that because I am not trying to sell these or enter them into the county fair.  They are just ok pictures of nice flowers. 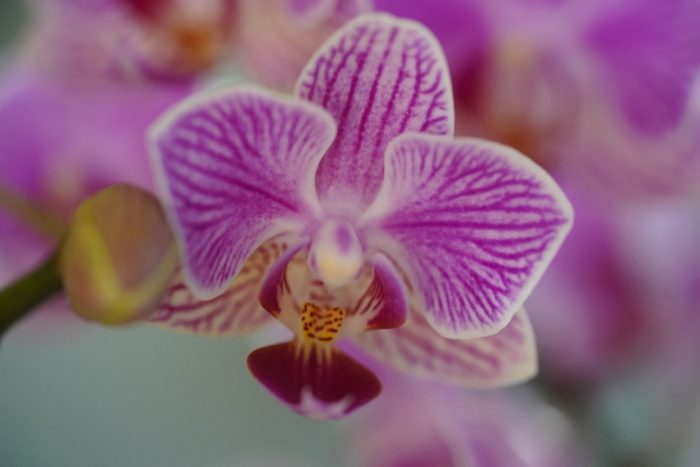 Later in May we found ourselves in Lake Forest, CA, which is in Orange County. The flowers are totally different there.  Vicki was living in this house when we met up again in 1998.  We saw no reason to sell it.  OC has great weather and no smog, but is crowded.  Too crowded for me, but a nice place to visit and see relatives. As you can see, stuff grows well down there, also. 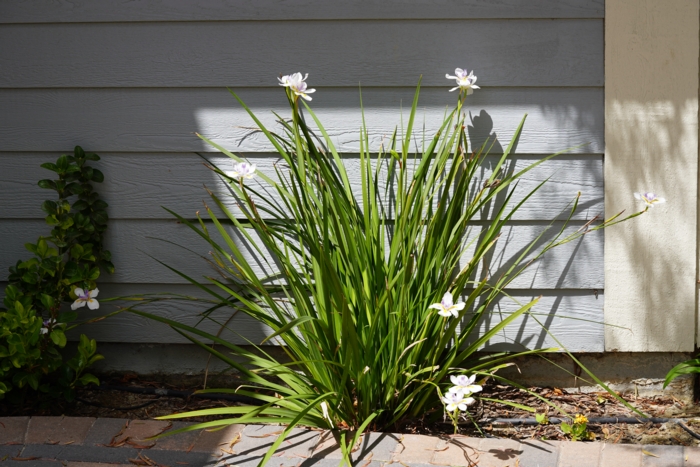 I don't know what this one is called, but it is pretty, especially up close.  Notice the improved DOF, since we have direct sunlight on our subject. 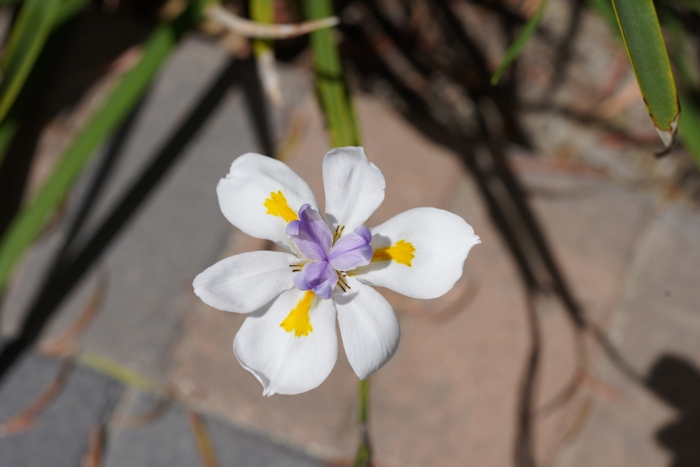 Some kind of daisy?  I'm not an expert.  A lot of flowers look like daisies to me.  Good, but not perfect, DOF.  Nice blurred background.  Note that I chose to not crop or center these images -- they are what they are, which is a plural variation of "it is what it is". 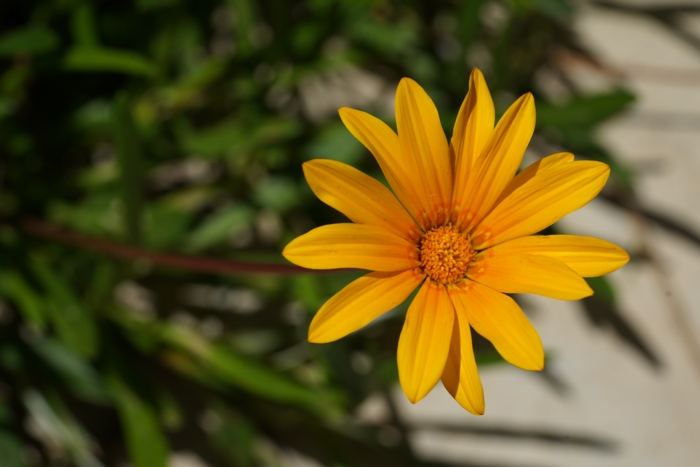 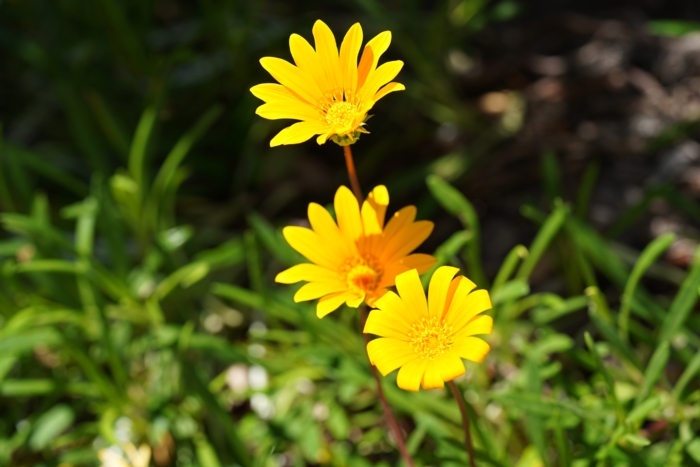 Is this thing a camelia?  It has those waxy leaves. Vic claims that it some kind of rose.

Nice, blurry irrigation hose in the background.  That adds a lot. Hah! 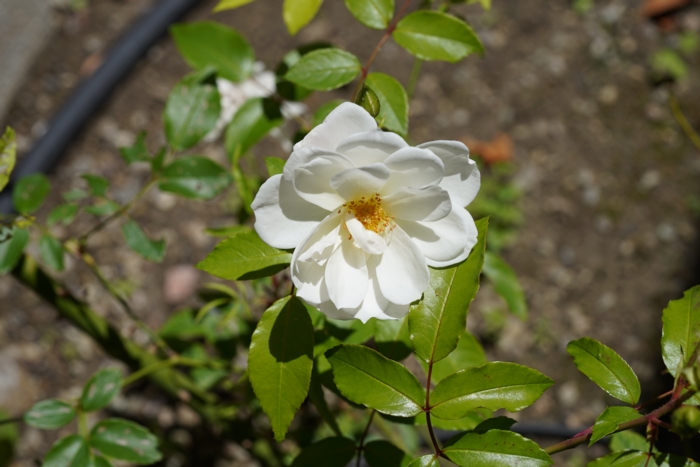 How about this one?  Is this a Hibiscus? At least we caught it just at the right time.  May in OC. 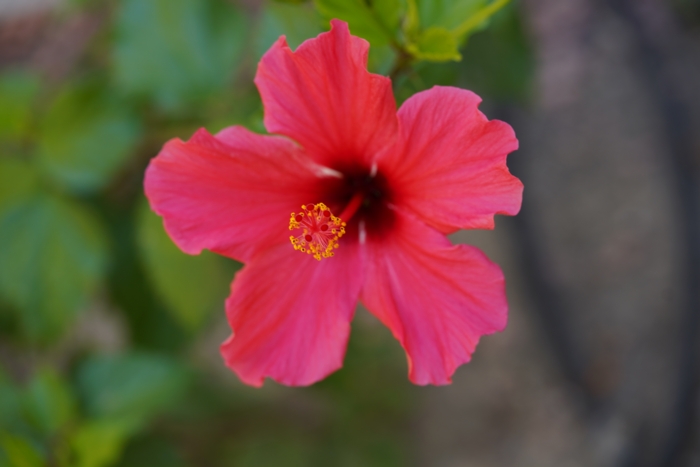 More sun, more distance, more depth.  Still, the little yellow things in the middle of the flower should be in better focus. 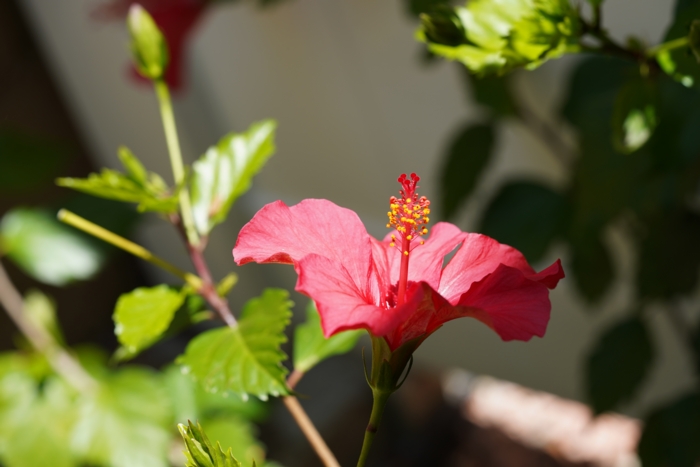 This is some sort of succulent by the neighbor's fence.  We used to pop these things with our fingers when we were kids. 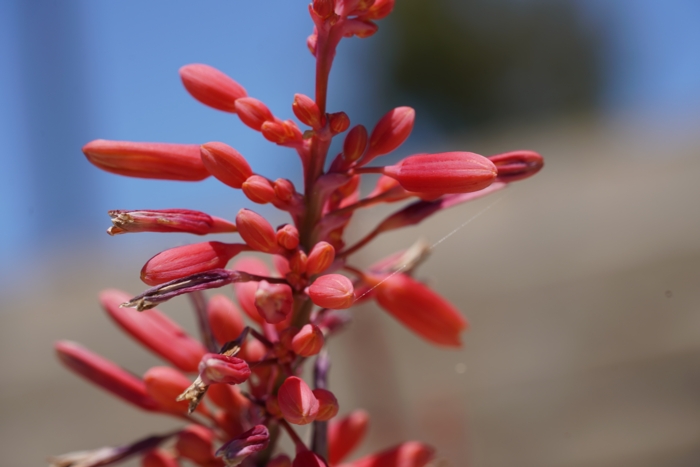 The blue background with the pinkish flowers works for me. 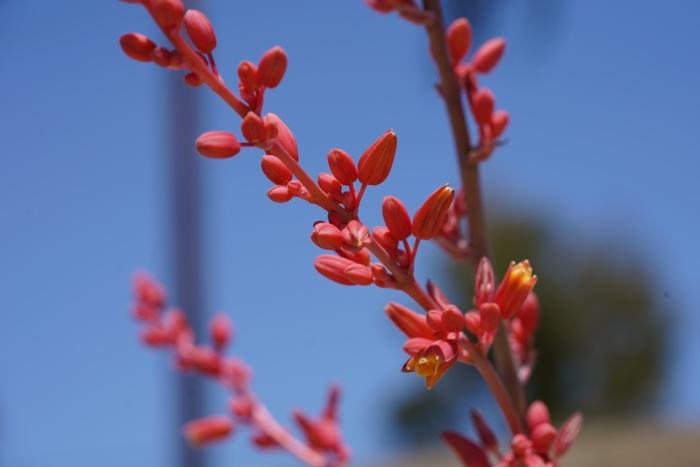 Another kind of cactus, as far as I can tell.  Well suited to the arid climate down there.  Without shipped in water, most of California is a desert. 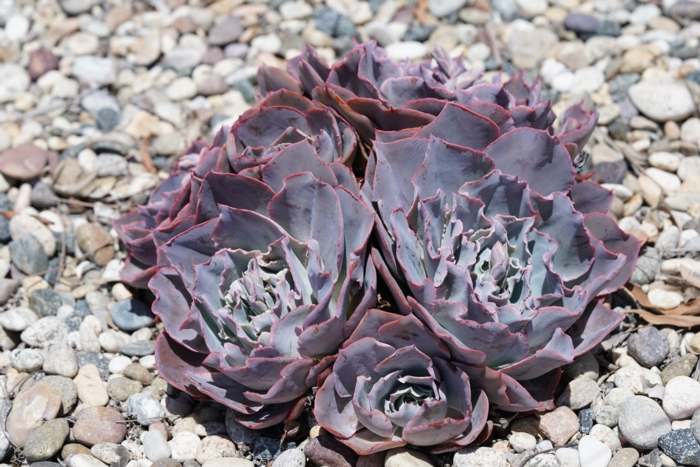 In July I went up to Nevada City to take care of some business.  We have a single clump of Shasta Daisies that is visible from the back deck.

Here is what they look like from that vantage point. 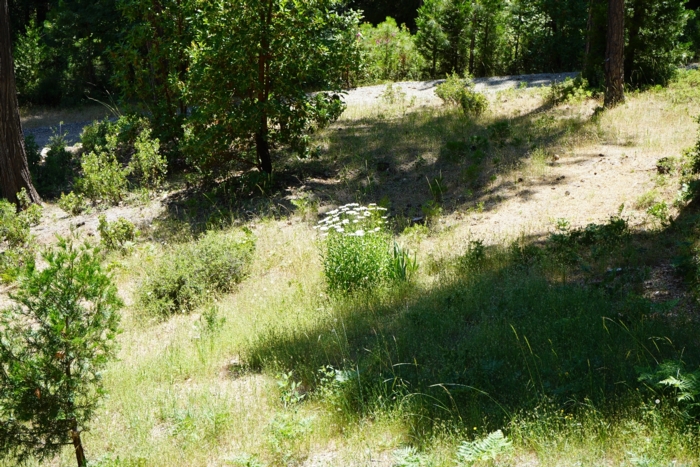 Then, up a bit closer.  They are extremely loyal and show up every year like clockwork.

The bugs and butterlies love these flowers.

When I see them every year, I find myself repeating, "It hasta be Shasta!" Does anybody remember that commercial for Shasta soft drinks? 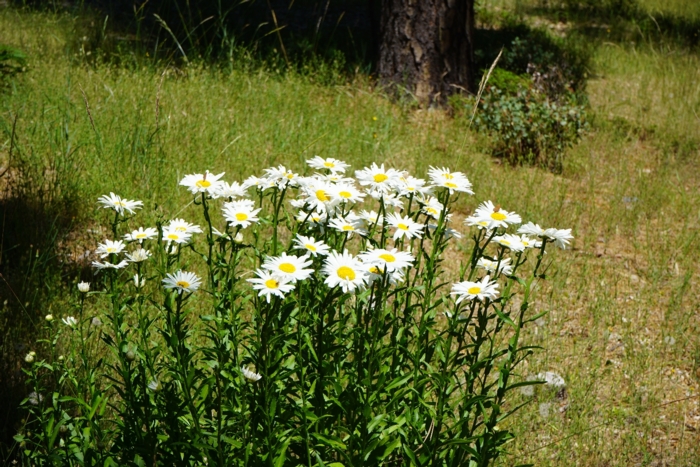 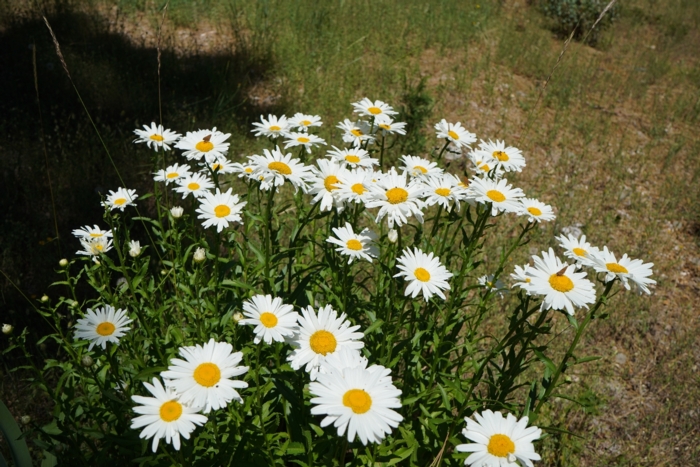 They are just about as robust as they are going to get in this shot.  We'll get back to them later. 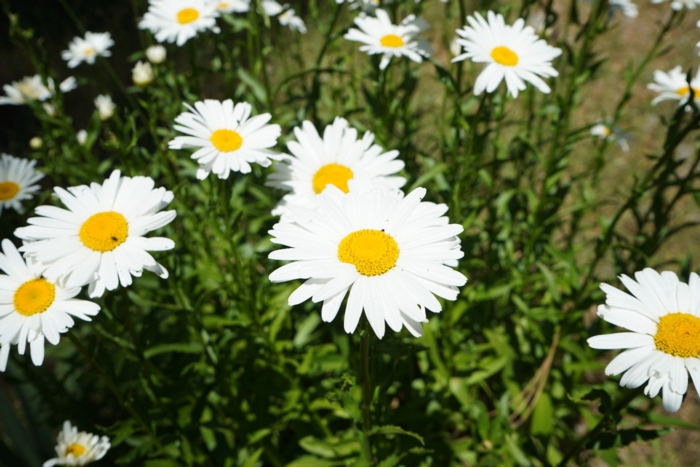 Remember that Ferndale trip we took for Vicki's birthday (July 28)?  We snapped a few photos of flowers there, too.

Here is a Hydrangea, I believe, at the Gingerbead Mansion. The flowers take on the color of whatever is in the soil.  They do better in a place like Ferndale (near the coast) than Bako or Nevada City. 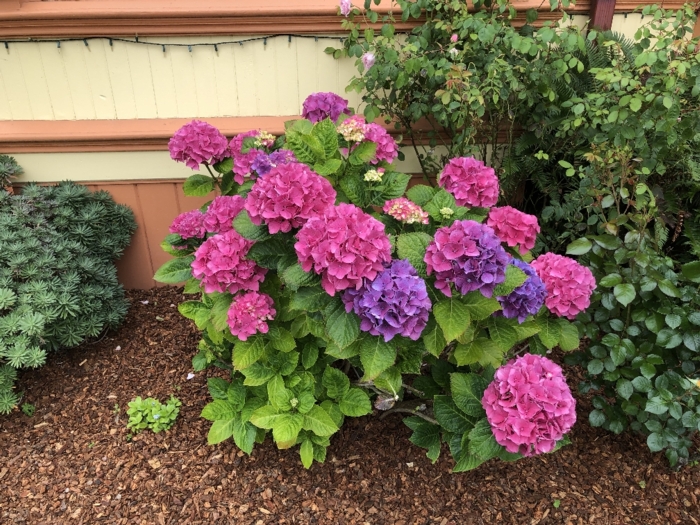 Not flowers, but pretty cool.  I think these guys are oxalis that we found along the trail on the Avenue of the Giants. 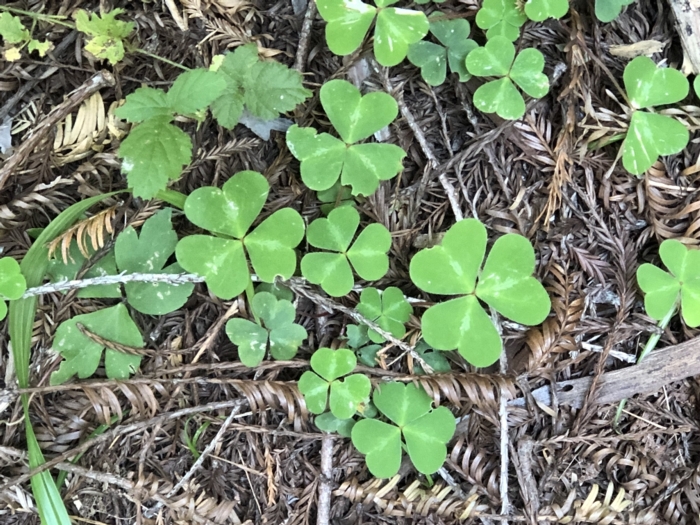 Finally, we return to our Shasta Daisies in late August.  Everything is now brown.  Bugs are all gone. 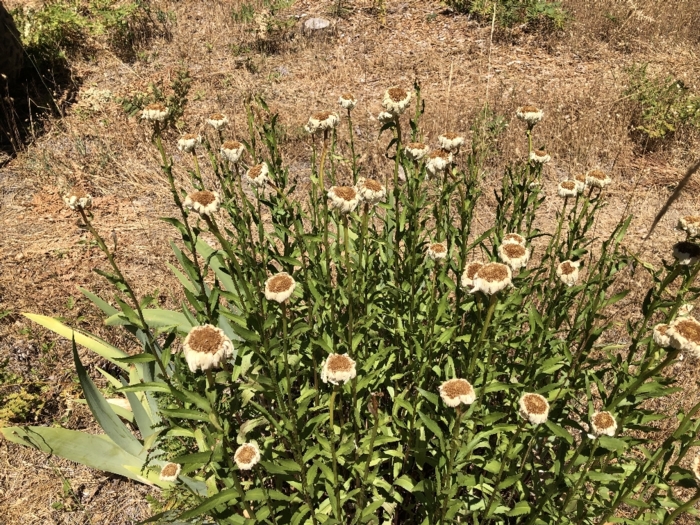 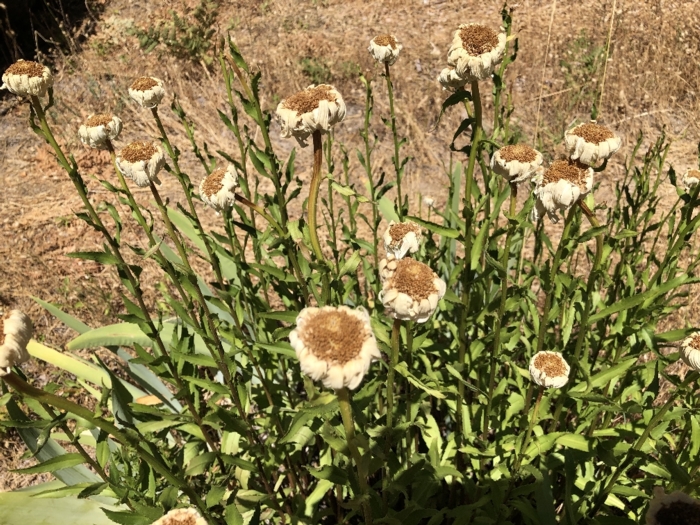 I guess this is what "going to seed" means.  Another flower season is over and done with.

We can actually go outside and do work during the middle of the day.  That's a plus.

The leaves on the black oaks are starting to make crinkly sounds.  They will start falling soon, but not until they get browner.

The crickets are making a huge racket during the evening at this time of year.  All of the sudden, you just can't help but notice it.  A nightly cacaphony, you might say.  How do the birds, roosting in the trees all around us, get any sleep?

There will be another praying mantis mating dance out on the back deck.  Happens every year.  The poor guy always ends up losing his head over the whole thing.  She will lay a cucoon close by, possibly on one of our screen doors, then die.

The squirrels are busy, as they always are this time of year.  How do they remember where they buried all the acorns?  I can't find my keys half the time.

Let's hope we get through another fire season.

And let's hope and pray that we all get to live through another wonderful season of beautiful flowers.

Please go back to the Home Page and tell us what you thought about this "flower feature".  Go HERE. 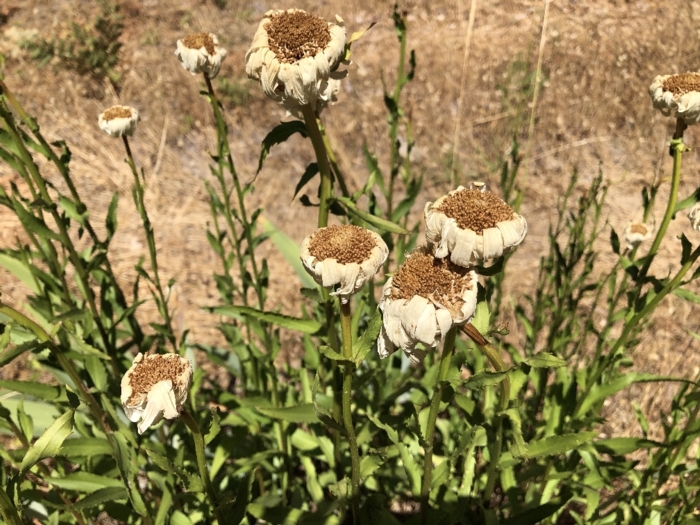