Fires In The Sierra Nevada

Big Fire in Our Area

This is a map of what the fire looked like yesterday.  It is in a similar area as the Paradise fire of a couple of years ago.  You can see that Paradise is in the evacuation zone (orange) again.

Centrally located, in the bottom fourth of the first map, you can see Grass Valley.  It is on HWY 49, north of I-80.  We live about 15 miles from Grass Valley.

It appears that we are about 35 miles away (south) from the fire.

Being a former wildfire fire fighter, I am not too concerned at the moment.  In my youth I worked for both the Kern County Fire Dept (seasonal fire suppression) and the US Forest Service, where I was a member of an "elite" Hotshot Crew for the Los Padres National Forest (1970).  I have been on many major fires.

Take a look at the map below.  Expand with your fingers as needed. 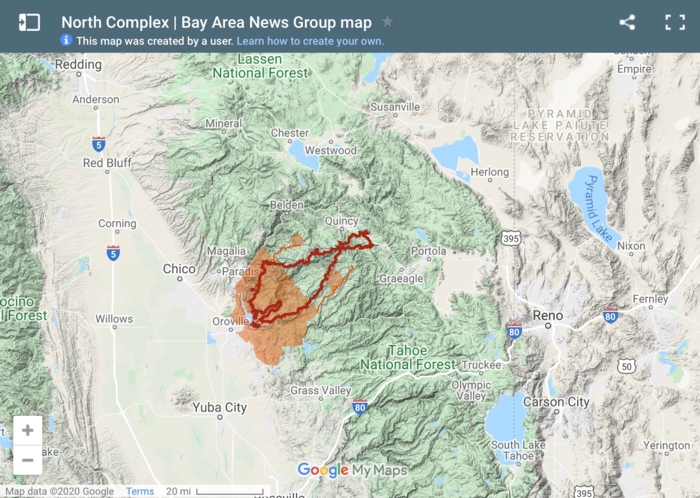 The only way a wildfire could spread to where we are is by heat, dry fuel, and a tremendously strong hot wind headed precisely in our direction.

You can't rule that out, but I am not resting uncomfortably at the moment.

The smoke from the Oroville fire was intense yesterday and still pretty bad today.  The sun appeared red.  I had to drive one of my ATVs out into the forest to see exactly how close the fire was to us.  Optical illusion:  it was at least 35 miles distant.

When you live out on the fringes, as we do, you realize that you, alone, are responsible for your safety.  We don't have a Dr Fauci to tell us, in an almost random manner, what to do and what not to do.  That's life in the Reynolds Autonomous Zone (RAZ). 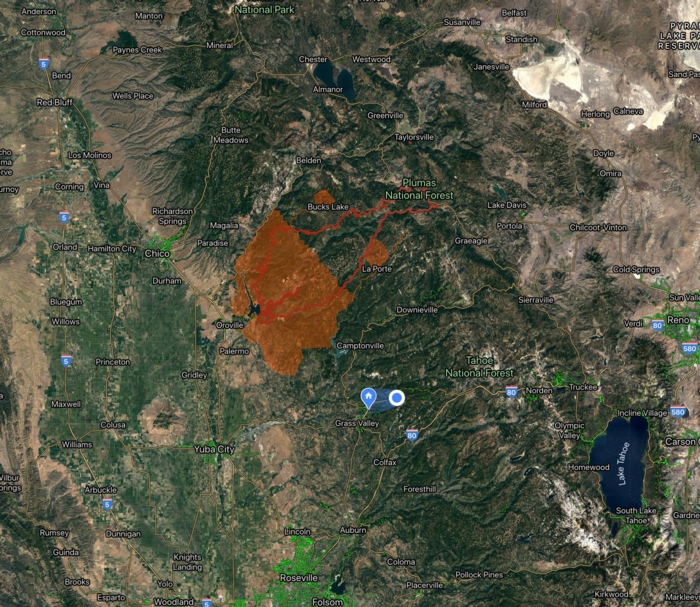 Above you will find another version of our fire map.  Here you can see the general location of our residence. Again, spread your fingers and check it out.  Lake Tahoe looks small compared to the fire area.

Losing our house here would not be good.  We like this place.  We have put much work into it, inside and out.  We both love this property but Vicki has a few more reservations than do I.  Where she sees work, I see an almost religious dedication to the land that we live on.  I think that there is something about humans that really cares about the physical property that they inhabit.  That's how I feel about these 18 acres.  I am sure that many of you that own land feel the same way.  If you live in a typical suburban neighborhood, as I have during most of my life, you probably don't know what I am talking about.  Same for you apartment dwellers.  Blame it on millions of years of territorial instincts, I suppose.  Unlike Marxists, BLM and Antifa, most of us care about property of all kinds.  As Bob Dylan said, "When you ain't got nuthin', ya got nuthin' to lose."

If the fire turned our way I would likely be the last person to leave.  It just takes a few embers that land in the wrong place to burn up your house.  Avoid that and you may survive the entire catastrophe.  My brother, John, survived a huge fire in La Crescenta (close to Pasadena) a few years ago by staying with a few other brave souls in his vicinity to monitor sparks and embers landing on their roofs.  They even wrote stories about him in the LA Times.  He and his neighborhood survived while other homes in nearby neighborhoods went up in flames.  In this case, the overly obedient sky-is-falling sheeple lost.  They usually do.

But why we pay thousands in property taxes every year is a mystery.  I've seen one county sheriff up here in ten years and he was writing parking tickets for people who wanted to enjoy the lake. Nobody is on welfare in our area.  No rapes. No assaults.  No riots.  No murders.  No cops. No schools.  No street sweepers.  No public transportation.  No public water services.  No public sewers.  No libraries.  We have a special assessment for fire services that we pay for, and I guess that's ok.  But why aren't others helping us out with this?  After all, we help them with many public services that we will never use.

I forgot one thing: thanks to the county for the roads that they keep maintained in our area.  I knew there was something that benefits us.  That's a good one.

Our taxes are paying for one of the the worst performing public school systems in the US (California), yet personally have never had a kid in that public school system.  And now those teachers, who we are forced to pay for, refuse to teach for apparently political reasons.  They tell us (on TV) that they will not teach until "after the election" in November.  They are actually saying that out loud.  That political decision is impacting families everywhere - from both political parties - and they don't seem to care.  Why are they punishing us?  Why do they think that they can get away with this?

And to think that I was a public school teacher (and a good one) for 10 years!  I am not forming my opinion through ignorance.  I know what it looks like from the inside.

How's this:  If you are an essential worker then go back to work and earn your pay.  If you are non-essential then don't go to work and don't get paid.  That way you are just like the rest of us.  If you have special risks then at least do the remote teaching/learning part, though I can't imagine that working very well for 2nd graders.

I think that public school teachers (or, rather, their union bosses) are making a crucial mistake in blue states and other blue jurisdictions.  We will never forgive them for politicizing their duty to the public by denying their services to the children of America.  Good grief!  These people have been off-duty for months watching Oprah during the daytime hours.  Yet we keep paying them for doing nothing.

Nobody is paying waitresses, waiters, cooks, hair salon workers, gym owners, church leaders, small shop owners and many others for doing nothing.  Stop paying teachers and they will start doing their jobs immediately.

I think we all know that.

On the other hand, I would gladly pay for school choice.  The reason that our schools are so bad is that there is little or no selection process available for parents.  There is no competition.  Parents have no choice but to send their kids off to classes that teach the incredibly flawed Critical Race Theory, for instance.  Give them choice and we will see that the public school system will improve dramatically -- or die.  They would also then teach what we want them to teach.

Competition is the key.  Without it, things will just get worse -- if that is even possible.

In the event that the fire comes our way and threatens us, I'll let you know how that turns out.  Anything is possible.  A 40 mile an hour wind pushing the flames through the tops of trees would be impossible to stop.

The likelihood of that happening is not high.  But I won't rule it out.

I also understand that many others are threatened by fires, particularly those of you in Oregon.  We wish you the best.  Please tell us how you are doing.

Lastly, we have been victims of another power shut down here in California.  It lasted only a couple of days, but we were on generator power the whole time.  Though we are prepared for this type of government enforced shutdown, many others in our area are not as fortunate.  Apparently, we can look forward to this type of government intervention from now on.  Who changed the rules?

My last thought: what is the real reason for all the power outages?  Could it be that the state is protecting itself from class action lawsuits?  Is THAT the real reason?  If that is the case then we need to change the laws.  But that would offend the legal profession, which heavily funds Democratic rule in California.  Do you see what I am getting at here?

My question: Speaking of fire protection strategies, how do we protect ourselves from gender reveal parties that get out of hand by igniting thousands of acres of highly combustible forest land?  And what do you name the kid when he/she/them is born?  Sparky? Smokie?  Or my favorite, Arsenio?

I know it is not funny.  But it made you laugh, right?  Such is the human condition.  We are pathetic.