From the 1968 Merrimac. Ubiquitous Stars and Bars in the background.  Somehow we managed to live through the flag experience without being scarred for life. 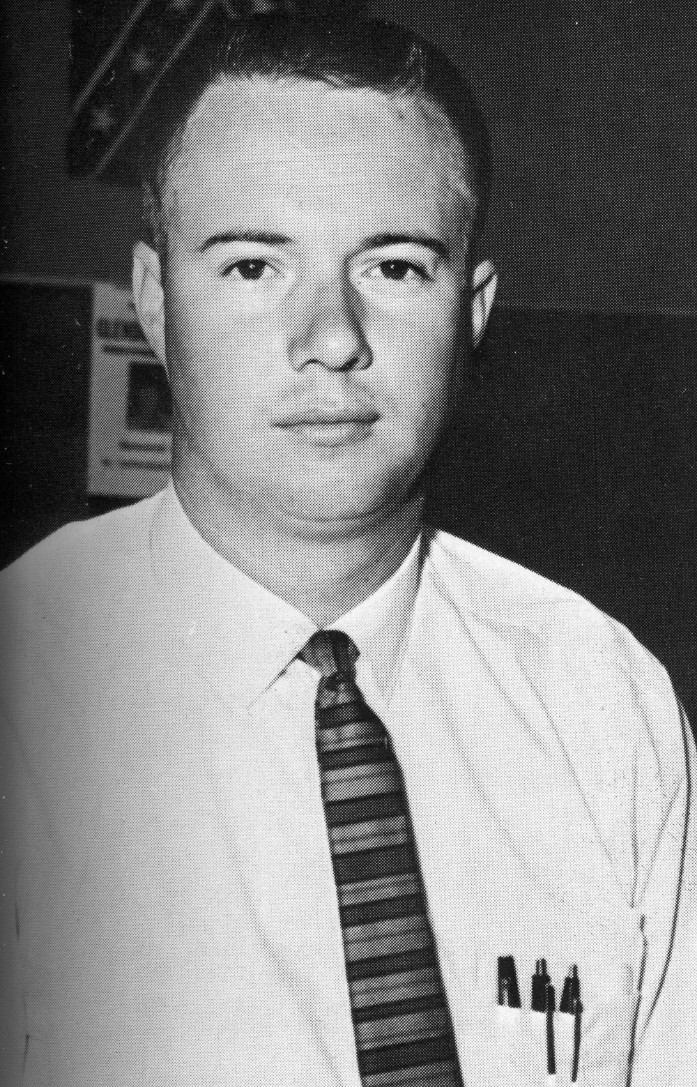 My introduction to Mr Harper was through the C Football team (Riders).  As I recall, we were pretty good with an exceptional defense.  I remember beating BHS on their field, which was quite an accomplishment.  You will notice a few of the players from our class here: Eugene Walker, Ronnie Sessions, Dirk Van Pelt, Jim Reynolds, Mike Newby, Ruben Rivera, Jeff Burns, Mike Obee and a few others.  There are several non-freshmen on the team, as well.  Not pictured is Vince Smith, who was a junior.  Harper is mis-labeled as Mr Koski in this photo.  Clete Harper was the drill master for this team.  He pushed us hard and it apparently paid off.  He was only 24 years old in this team picture.

Also of interest is the fact that there is not one freshman on this team that later became a varsity lineman. 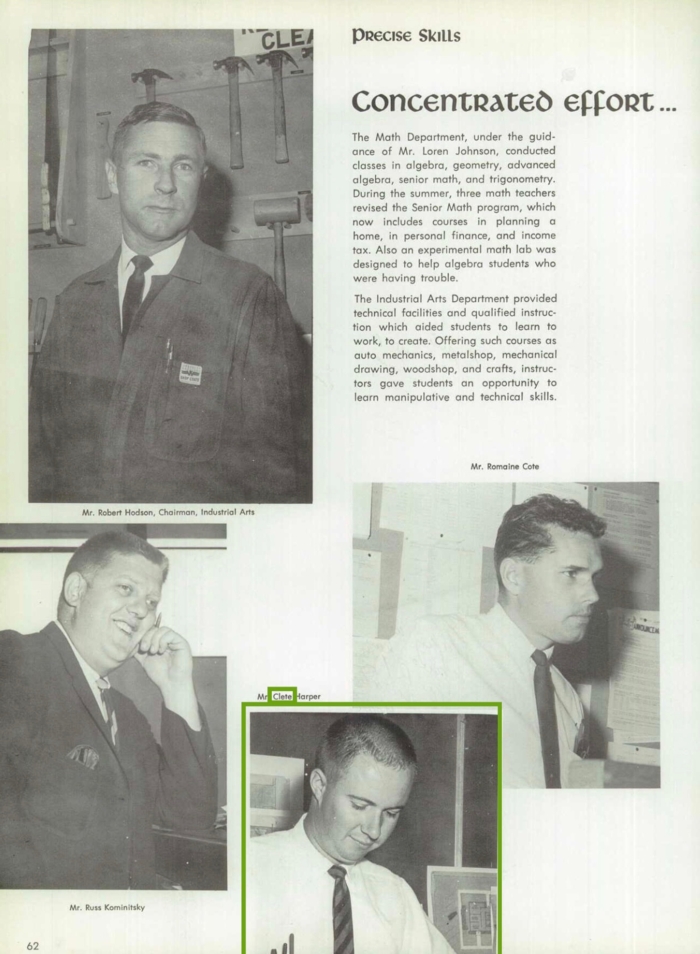 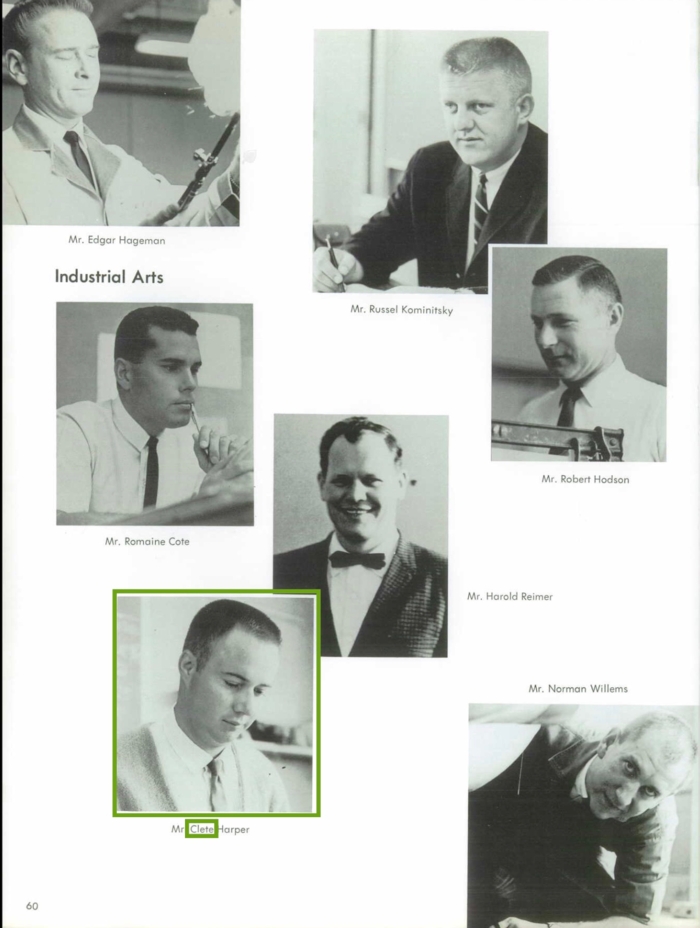 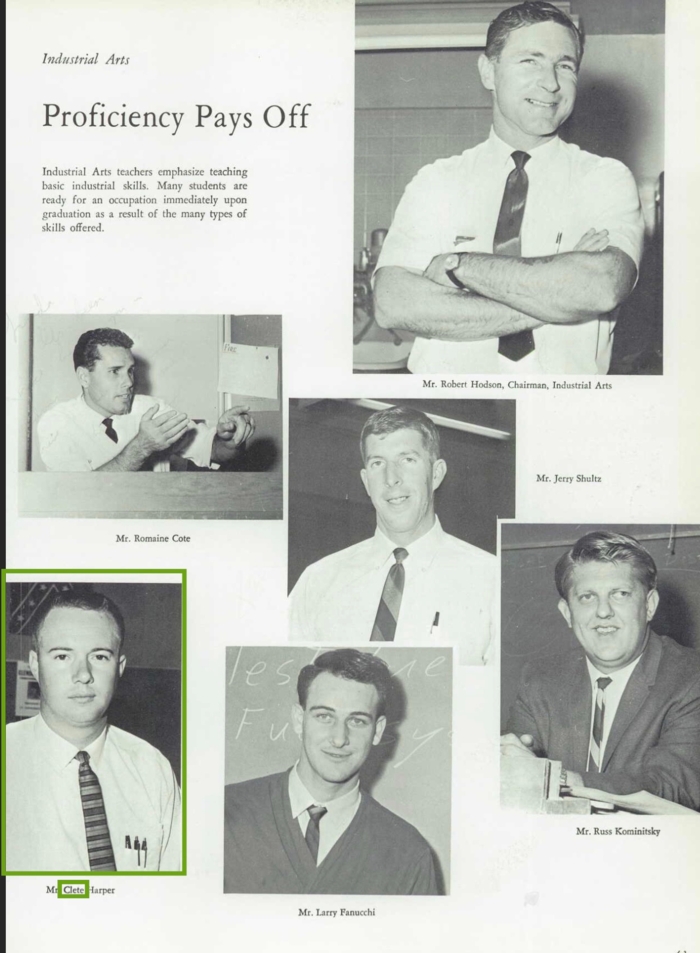 This batch of staff photos was taken sometime in the 1970s.  Clete Harper upgraded his crewcut.  Harlan Hill looks the same as always.  John Henderson was the varsity basketball coach for the 4 years we were at South. 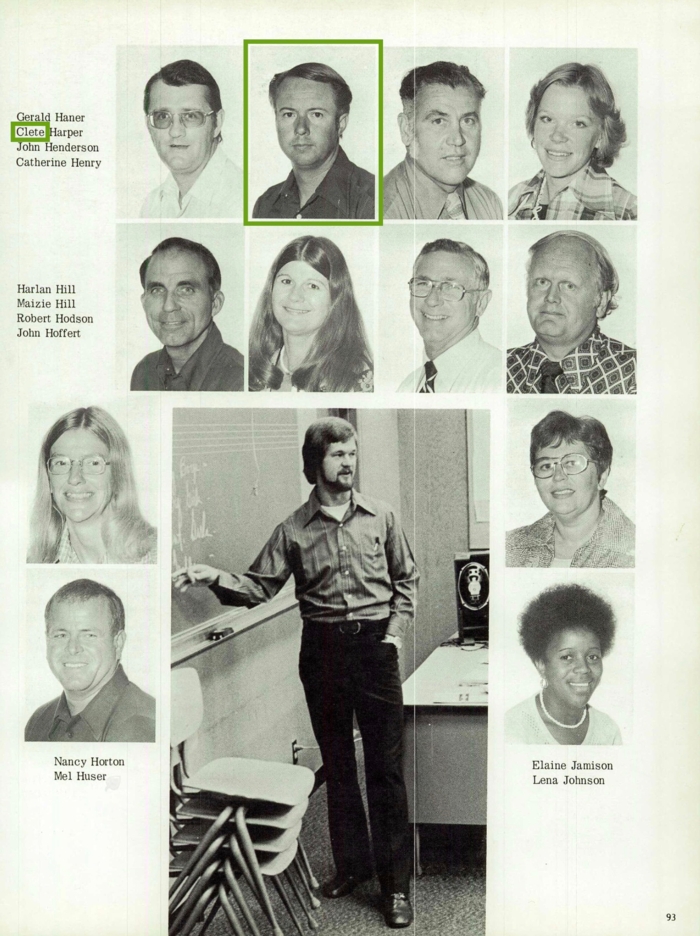 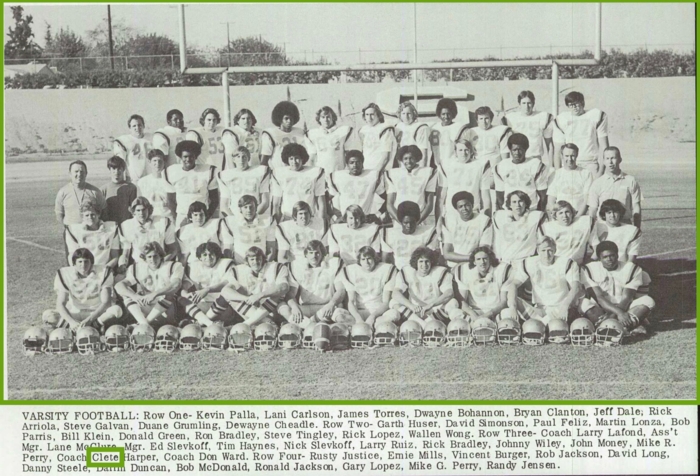 The Block S Club.  When I got into teaching in 1974, the kids pretty much looked like this.  So I am guessing mid-70s. 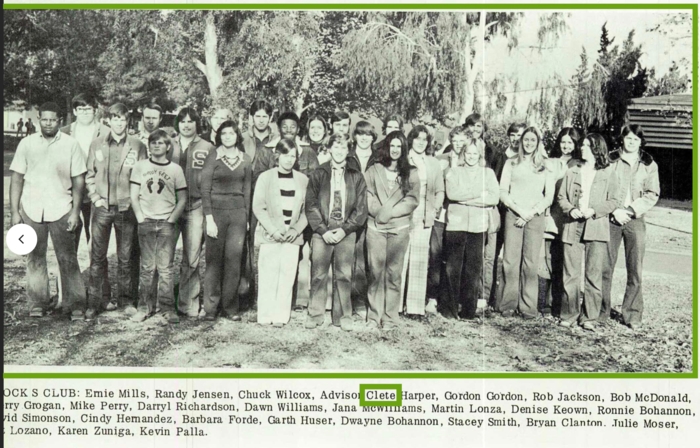 The next few photos are from Clete Harper's high school years.  He went to North High, just like Don Ward.  However, I believe Harper attended North after Ward had moved on.

Interesting that Harper knew he wanted to be a teacher early, even in high school.  They call him Cletus in this picture.  Our 1964 C team would mutter "Cletus" when he pushed us hard during calisthenics or wind sprints.  He employed a hard-ass persona to get the most out of us. 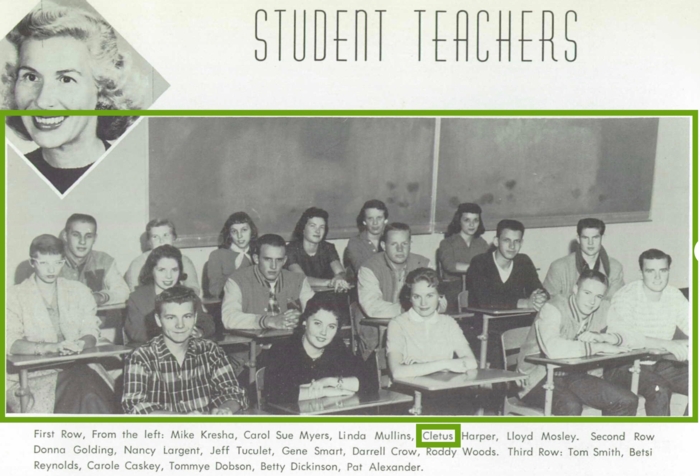 Looks like a senior photo here.  His goal has something to do with Architectural Drafting.  Did he teach that at South? 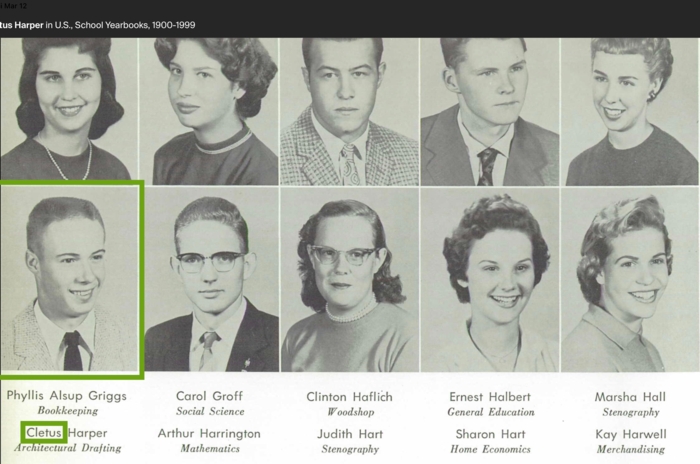 Here he is with the North High football team -- right in the middle.  Not sure if this is the offense or defense. 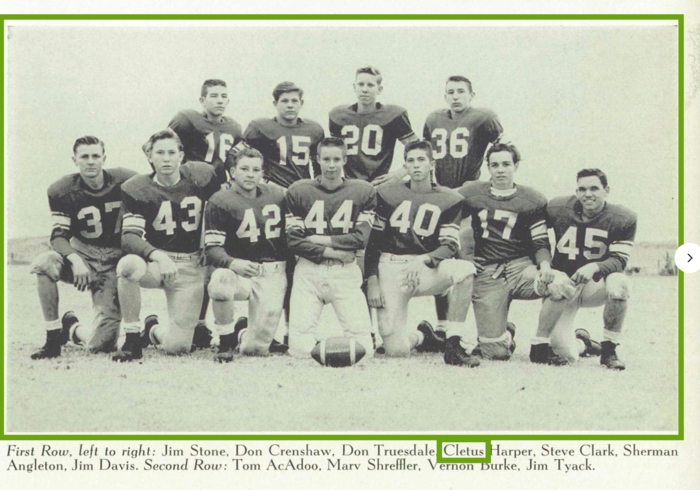 Is this the North High Stars varsity basketball team?  Did you pick out the other future South teacher and administrator?

The coach is Richard Moordale -- looking very fit.  Moordale saw much action in the Pacific during WWII.  He was with the US Marines.

They don't make teachers like that anymore and we are less because of it. 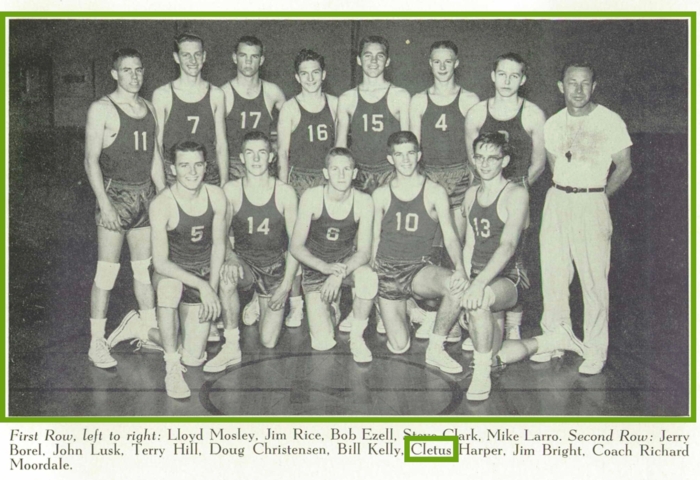 Here's something else I found on the internet that mentions Clete Harper.  It is a Bakersfield Californian piece from 2006.

Update: I just noted that Terry Hill, the joint owner of the wine enterprise, is also in the basketball photo above.  So the two were friends for a long time.

Except, these days, in Oildale.

Two wines from the recently launched Oildale Winery began disappearing from shelves into shopping bags this week, only hours after their retail debut. Longtime friends Clete Harper and Terry Hill, both 61, began delivering the wine Wednesday to local stores as the next step in a hobby that has blossomed into a business venture.

The pair labeled the wine Harper Hill. And the varieties? RedNeck Red and White Trash White.

"We're trying to just have some fun. Everyone is so serious anymore, so thin-skinned," said Hill, owner of Executive Benefits, a financial planning firm.

Harper and Hill, North High School graduates, intend for Harper Hill to poke fun at wine snobs and the north Bakersfield neighborhood where they grew up. The wine sells for $12 per bottle.

On the bottles' fronts, the labels depict unflattering sketches of a mustached man with chin stubble and a bare-shouldered blonde with a blackened tooth. Where a wine's origin and traits usually go on a bottle's back is a wordy, tongue-in-cheek bit ribbing Oildale and the often pretentious tone of wine labels.

In part, it reads: "Strategically planted between pumping oil wells and oil sumps are rows of grapevines. This blend of oil and tar-tainted soil lends itself to a wine grape flavor seldom duplicated throughout the world of viticulture."

There are, in fact, no Harper Hill wine grapes planted in Oildale. The wine is bottled at Cacciatore Fine Wines & Olive Oil Corp. in Pixley, about a 45-minute drive north of Bakersfield.

Oildale Winery exists in name only. The business is operated out of Executive Benefits' Stockdale Highway office. Next week, the two men plan to seek additional local retail outlets.

Harper and Hill, both former teachers who left education for business, were barbecuing 18 months ago when the concept of manufacturing a novelty wine took shape. They purchased wine-making kits and produced dozens of bottles of "marginal to awful" quality that friends snatched up, said Harper, a construction manager at Fairway Development. It took about a year to attain state licensing, design labels and find a winery to bottle what's being sold today.

But the pair have no plans to make a full-time vocation of the wine business.

They are looking for a distributor to spread Harper Hill beyond Bakersfield. Perhaps, even, to the aisles of such high-volume stores as Vons and Trader Joe's.

"We kid about Oildale. But the redneck thing is universal," Harper said.

Longs Drugs on Stockdale Highway sold out of two cases of the Harper Hill delivered Thursday in three hours.

"I was worried it might result in some complaints. But everybody seems to have a good sense of humor," said Tom Dwyer, store manager.

The Gourmet Shoppe began carrying the wine Wednesday and by Thursday afternoon had sold at least 20 bottles, said Shai Gordon, co-owner of the store that prices wine from $5 to $200.

Gordon hadn't yet tasted the wine. He likes it for the novelty.

Customers "don't expect big things from the wine. They just want to have a good laugh,"he said.

The quality of what's in the bottle, however, is no joke to Harper and Hill.

"We want to make the point this is a good wine. Nobody would be embarrassed serving this wine to their friends," Harper said.

If the redneck theme proves successful, Harper and Hill hope to introduce other wine varieties and champagne under the Harper Hill label. Though not indicated anywhere on the wine bottles, RedNeck Red is a cabernet; White Trash White is a chardonnay.

Each has invested, they said, no more than $500 in materials to launch the business.

Regardless, it's a no-loss venture, Harper said. What doesn't sell can be drank.