Here's the rest of the groups that we investigated, in terms of showing up for a reunion 50 years after high school.

We will build a thunderous crescendo towards the ultimate winner of this survey.  Many thrills and chills along the way.  No fair peeking ahead of time.

The obvious group that we need to thoroughly analyze is the cheer squad.  Our cheer/song group was quite unusual in that several of them were spirit veterans by the time they did their thing on the sidelines in 1967-68.  We had an experienced and talented crew our senior year.

But were they able to show up 50 years later? 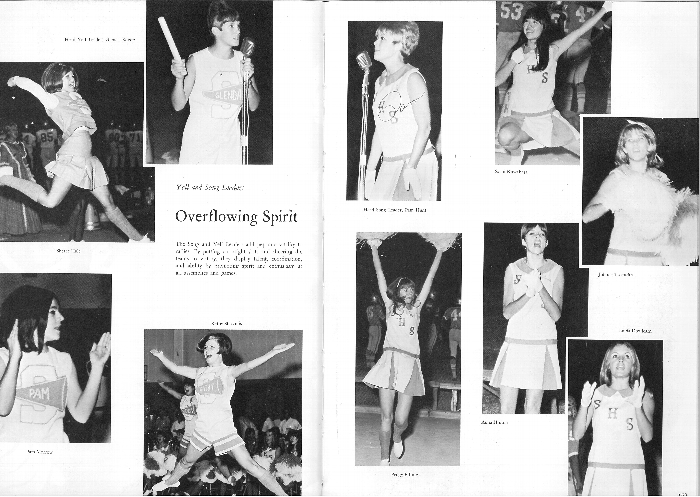 I see 6 seniors on these pages.  By the way, I love the old fashioned microphones in these shots.  Gives them a 50's look.

True to their advertising, the yell/song people definitely showed spirit at the 50th reunion.  5/6 = 83% participation.

Yay!!  Glenda had a conflict but really wanted to be here, too.  Great job, all.

Back to politics -- let's look into the activities and whereabouts of the Executive Board.  Here they are: 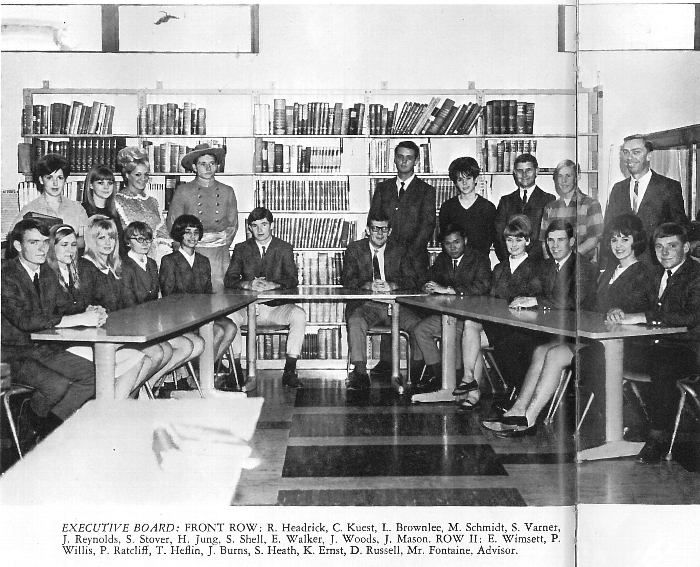 Now you would think that this bunch would want to be represented strongly at post high school functions.  Most of them were elected by the student body.  You will note also that the class presidents are in this august group, too.  I count 17 seniors here, including all the seated elected officers.  How many showed up after 50 years?  I count 10/17 =  59%, which is pretty darn good.  There were time/distance issues with some of them and others did not appear for unknown reasons, though we spoke to several.  Headrick was impossible to make contact with (I knew Ron at UCSB, too).  Mr Fontaine was one of my favorite adults at South.

Ok, how about the jocks, in general?  Let's take a look at the Lettermen's club.

Quite a group here!  I count 21 seniors in this bunch.  13/21 = 62%.  However, I was in this club, too, but was probably running the house of representatives at the time. So I'm going to give the Lettermen 14/22 = 64%.  Of course, Wal Topic and Mike Beckerdite were also probably in the club, but did not get credit for the picture.  Neither did Dirk VanPelt.  I have no idea what happened to my lettermen's jacket.  Has anybody seen it?

Let's take a look at some more scholar-athletes.  How about the football team?

I see 12/19 = 63%.  However, we can't forget that Don Ward is in the photo so the team should really be 13/20 = 65%!  Along the way I spoke with old friend Wal Topic and Mike Bailey, but they could not make the trip.  Never did make contact with Dirk, who was one of the more interesting people I met in high school.  I was able to have a conversation with his sister Christine, however.

Ok, only three groups are left -- and one of them will be the WINNER!  Who will it be?  Can you guess?

Take a look at our 1968 varsity baseball team: 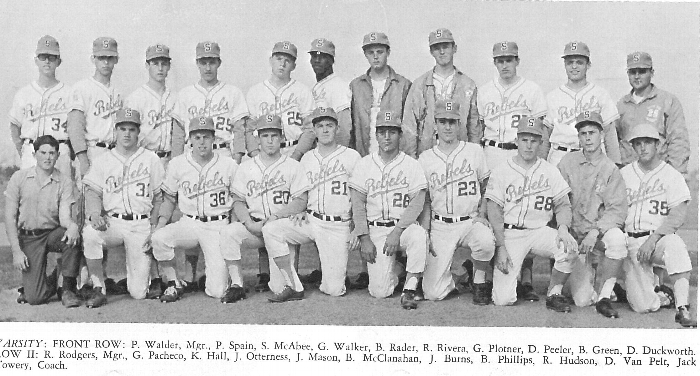 The most impactful player that year is not in the photo.  He was a freshman phenom pitcher.  However, we do have 11 seniors,counting the manager, Ron Rogers.  Final numbers?  8/11 = 73%.  That is truly a great turnout all these years later.  However, keep in mind also that 7 out of those 8 reside in Bakersfield.  So there is your proximity effect, once again.  I had no idea that John Otterness played on this team.

Was there an athletic team that showed up at a higher rate than the baseballers?  Yes, there was, and here they are: 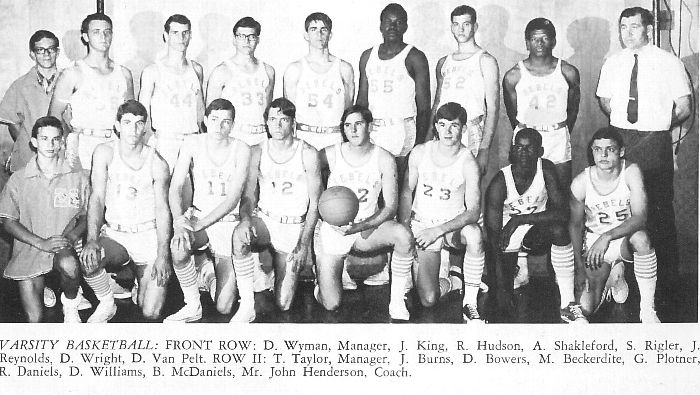 There were 10 seniors on the varsity basketball team that year.They all showed up at the 50th reunion except Dwight Wright and Dirk VanPelt. The team was not particularly good that year but they made up for it with staying power.  8/10 = 80% participation!  Coach John Henderson had to bow out at the last minute, also. Interestingly, there were at least 4 of the 2018 attendees who do not live in Bakersfield: Billy Ray, Alan, Mike Beckerdite, and JR.

I was feeling pretty proud about this revelation until I realized that I had not counted one more group. 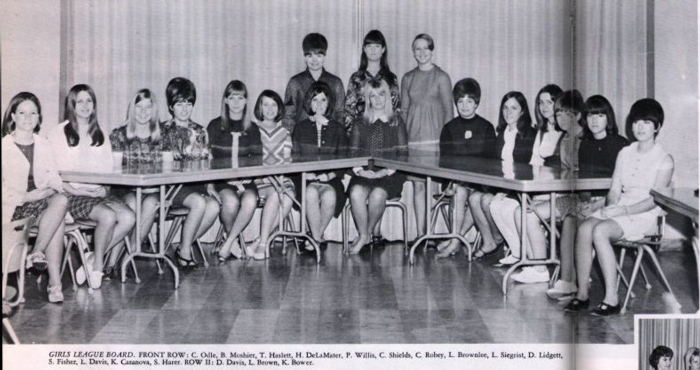 So the winner of this non-contest is the 1968 Girls League Board.  Do you have any idea why this was the case?

Interestingly, the 6 that did make it to the 50th reunion are sitting next to each other in this 50 year old photo! What are the chances of that happening?

And there you have it.  It's amazing, really.  The turnout rate of several of our groups is truly astounding after all these decades.